It all started as a joke, I’ll fly to New York for a REAL slice of pizza. The more I thought about it, a food tour was absolutely needed. “I’ll just check the air fares for kicks” I whisper under my breath, assuming all last minute flights would easily be an arm and a leg. Pro tip: airline tickets are cheapest on Tuesday’s, did a little research and it has to do with the forecasting and all that jazz. Definitely was not expecting to score round trip tickets for less than $100…are you kidding me? It is less for me to fly to NYC for the day than a Disney World Park Hopper ticket…or a single park ticket for that matter. (Flight was midweek and I’m sure that probably affected the price) either way…I AM SO IN! If you know me at all, I am not afraid to travel solo. And that is exactly what I did (mental note – I need to fill y’all in on my day trip to Key West from last year)

For those afraid to travel alone, I would highly recommend it. Whether you like to plan an itinerary or try stuff on a whim, choose your own adventure! You are responsible for your own happiness. I had some loosely planned ideas of how my day would go, including meeting up with multiple friends who live in the city. Being such a short time frame and busy environment I told myself I was not going to let anything ruin my day — hit some key spots and above all else MAKE IT BACK TO THE AIRPORT with plenty of time to spare. Lord only knows I would have to fork over a lot more just to make it home, my own spontaneity will be the death of me. Thankfully that was not an issue. Unfortunately I was unable to meet up with anyone as planned, but on a positive note I hit my favorite places and even had a few hours to kill.

I would also suggest resting a lot prior to an adventure like this. With all the excitement I barely slept and when it was all said and done was awake for over 36 hours. Don’t do that. Running on straight coffee and adrenaline all day….30,000 steps later and let’s just say I am glad I wore sneakers. HOLY blisters. 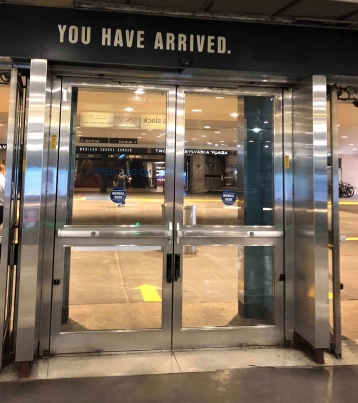 10:00 AM – The first thing I had to do was go to Central Park. My absolute favorite spot in the city. With how scattered my destinations were, I wanted to make sure I carved out some time just to sit on a bench and people watch. On all of my previous trips to the city, I have spent quite a bit of time strolling through the park… even getting lost in it.

To be honest with you, the time stamps after this were kind of a blur. I kept hopping on and off subways, the hours flew. 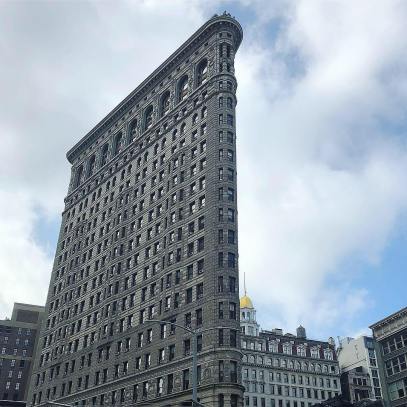 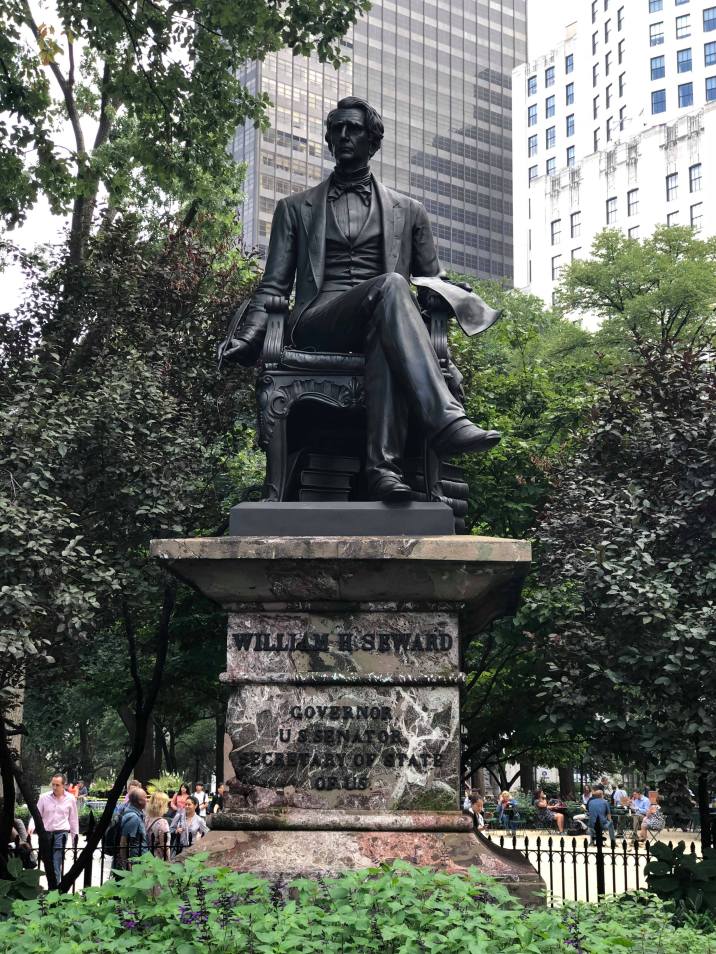 Luckily, I had just got my Apple watch…so you already know I was flexing that rose gold and feeling like I am finally with the times. Buy the Subway app if you have the watch, made the entire experience a lot easier. I am pretty confident with my navigating abilities, but as far as detours and rerouting…I need Siri’s assistance just in case. Especially that day, time was of the essence. For those of you who refuse to use the subway and only ride a taxi… some of us are balling on a budget. 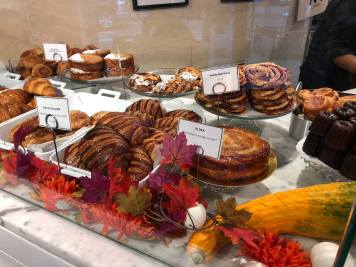 Heard a lot of positive things about their cronuts and dka, which they definitely lived up to. The flavors of the bakery items change monthly, so each time you visit prepare yourself for a new sweet treat. 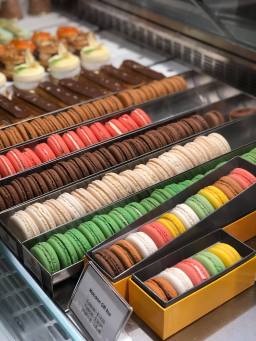 Even after a few pastries, you already know my stomach was still growling for more breakfast. If you went to NYC and didn’t get a bagel did you even really go to NYC? 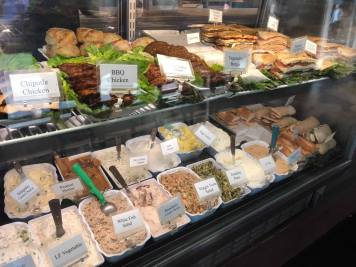 Just like the name, you pick a bagel. Or a dozen… I opted for an everything and a rainbow, because why not? There is no bagel better than a NYC bagel. If I lived there it would be CARB CITY (even more than now) because that would be my go to on the daily. The schmears, the saltiness, the bread quality…all of it. Perfection.

After I grabbed my bagel I had to hit Forever 21 to buy a new outfit. Ya girl prepared for cooler temperatures, and ended up hitting close to 80 degrees  *FL weather* (Ugh why?!) so by this point I have changed into a tank top and ditched my long sleeves.

For the record, all I brought was a small backpack so storing some extra clothes was no biggie. The bag was mainly to bring pizza and bagels back home (ya I was that person) because I had to share some goodies with my Florida Fam. Flew #basic economy so there was no additional bag charges. 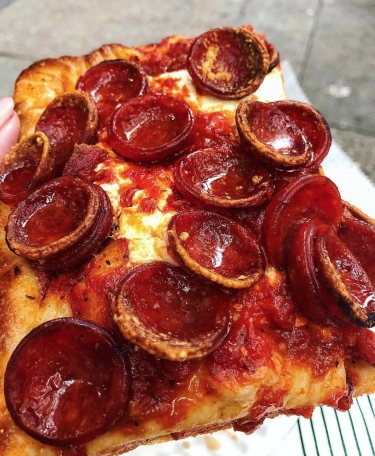 Ok if you’re still reading, THIS is the reason I flew to NYC. I saw photos of this pizza…the slices had me salivating. I even DREAMT of this pizza. That’s when I knew I had to try it. To no surprise these slices were as mouthwatering delicious as they looked. For a fair price and generous size I was in absolute heaven. To this day, best slice I have ever had. Don’t neglect your taste buds, you deserve a pizza-this-action! But really, if you are in the city and you only have time to stop at one place GO HERE.

After getting my pizza fix I did quite a bit of walking. On carb overload… and at about 15,000 steps by noon… I naturally grabbed myself an Arnold Palmer and some street food. In utter fear of missing my flight, I began window shopping and heading closer to my final stop (happy hour) prior to the airport. Popped into the NYC Christmas store, and it brought me back to my trip last year when I first saw snow. 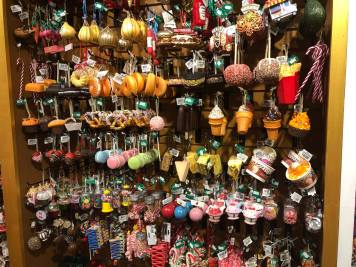 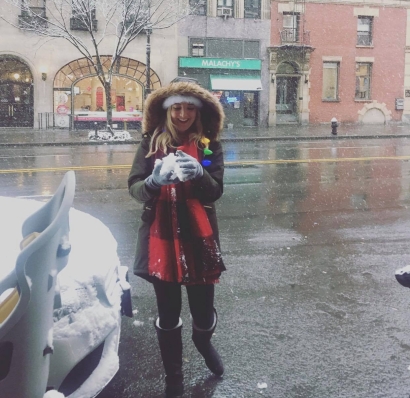 Of course I got a little side tracked, had to pay a visit to the MOMA.

Being an artist, I appreciate walking through galleries and exhibits. Ended up leaving feeling inspired, and as if I was meant to have been there. Always a cool feeling. After wandering for about an hour I left to grab a drink before my flight. 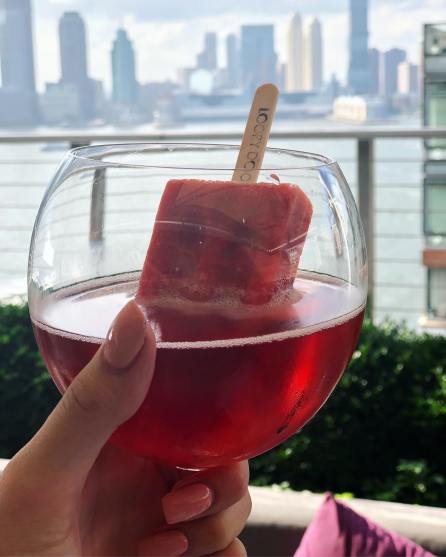 I have been here before, and thankfully at this day/hour it was considerably less crowded. On the top floor of the Conrad hotel lies Loopy Doopy – that famous rooftop popsicle bar you’ve seen that is incredibly instagrammable. Only been there during the day, but I can imagine the views would be equally if not more beautiful at night. Direct line of sight of the Statue of Liberty and sky line of the city.

I will say the drinks are a tad pricey, but you’re in New York what do you expect? Pick you a pop, your wine, then its Loopy Doopy time. It’s no joke, the drinks are pretty strong. Multiple flavors of popsicles, and you know I had to try a few…for science.

Happy Hour has hit, and I am beginning to feel like Cinderella. The clock is going to strike and I just need to get home. Am I being a little dramatic? Yes. There was plenty of time…but truthfully I would rather be posted up with headphones in my ears and food in my lap at the gate than be running through security in the eleventh hour.

Loopy Doopy is right by the World Trade Center. Took the train from WTC to JS 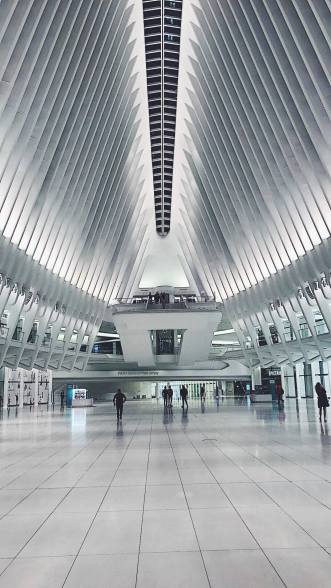 By this point I have eaten some airport food. You know carrots and hummus. Trying to keep it a little healthier towards the end of the day. Shout out to United Airlines for the pretzels.

When it was all said and done, I was home close to 1:30 AM. My feet hurt, my legs were jello. My stomach was full, and my heart was happy. Couldn’t have asked for a better day.

Want to know something even crazier? The couple sitting by me on the flight in the morning was on my flight that evening as well. Others taking a day excursion to the city that never sleeps.

When I tell people I’ve taken day trips to places, the looks I get… But why? Traveling alone was thrilling and absolutely had me out of my shell. For someone who can initially come off shy, I was befriending people every where I went. Don’t believe the rumors, all the New Yorkers I met were so friendly! But it was more than just the city, the people, the food… getting away and doing so alone was beyond cathartic. Never realized how much I could quiet my own thoughts, even among the loudest of horn honks.

Blessed is an understatement, this day was one for the books. Oh New York City, I will forever be in love with your lights, the sights, and most importantly your incomparable bites. Until next time ~

Other places to consider going to:

DYKER HEIGHTS, BROOKLYN – Not food related BUT If you will be in NYC near Christmas go see the lights in this neighborhood. Yes go see the tree and other notable spots, but if you wanna see how the locals decorate that is the spot!

JUNIOR’S – an absolute must, especially for cheesecake!

SAUCE & BARREL – Got the opportunity to stay in the financial district, across the street from this pizza joint and beer garden when I visited last year. Great food and atmosphere, definitely a sit down place vs. Prince Street’s grab and go.

BLACK TAP- Known for outrageous burgers and milkshakes, come with an appetite. 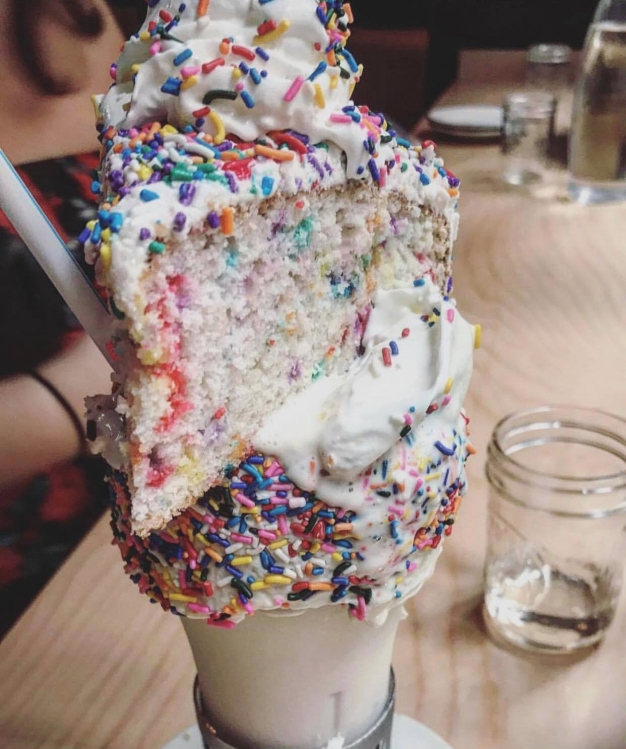 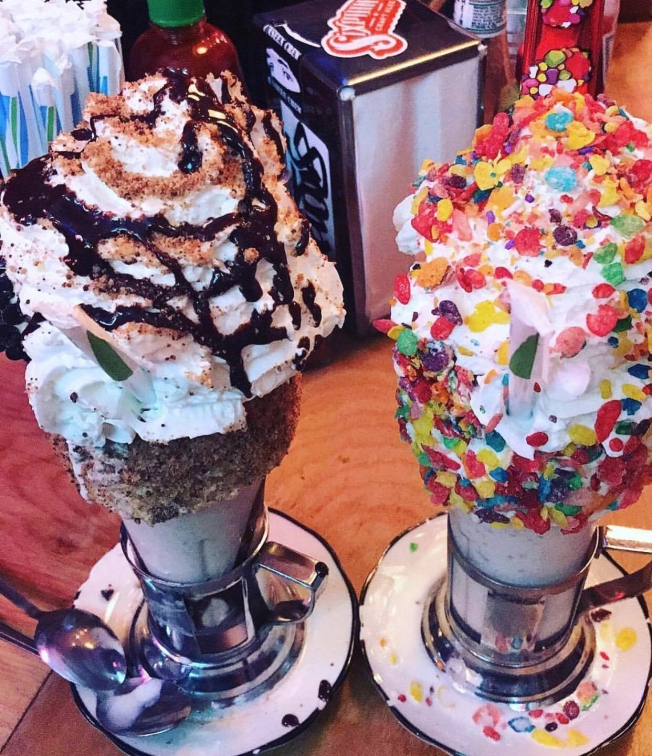 STREET FOOD- I know I mentioned this prior, but street food is the best. I got so many slices of pizza, bagels, pretzels, knishes, you name it. Don’t be afraid to see what the corner store has got going on too. Most of these convenient one stop shops also are deli’s. 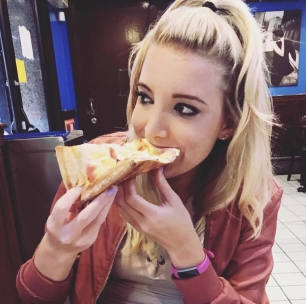 KATZ DELI- Not pictured, but these sandwiches are TO DIE FOR. It’s a must if you’re in NYC. Very touristy, and get your camera ready…that Harry Met Sally seat is a kodak moment.

HOLEY CREAM- Doughnuts and ice cream is always a win. Combine the two to enter heaven.

Thanks as always Foodie Fam, and let me know other notable stops for future NYC trips.